Crossing with the Road of Poem and Border, the Ontrei Malinen's Kantele Tour Route is now part of the same administrative entity as Via Karelia. The route has been planned to serve independent tourists. It provides a glimpse of culture and lifestyle on the other side of the border, closely linked with Finnish society in many ways.

The route takes you from Kajaani to Sotkamo, crosses the border at Vartius and continues to Kostamus, visiting many central places where the poems of Kalevala were gathered by Lönnrot and other collectors of folklore. The very same places were photographed in the late 19th century by Into Kondrat Inha. His works are today classics of Finnish photography. His books on the White Sea Karelia, Viena, are a good way to learn more. 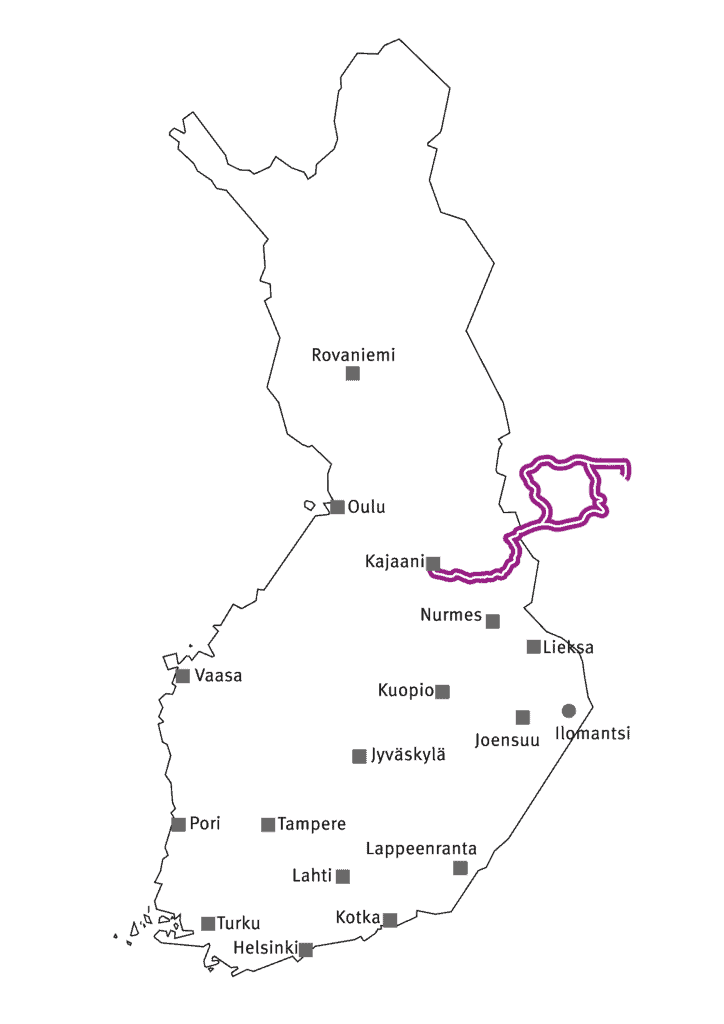 The same Viena region is the topic in historian Lauri Haataja's and photographer Martti Lintunen's book "Karjala-Nostalgia" (Karelia Nostalgy) from 1990, and a book by Rauno Meriö, the former Commander-in-Chief of the Air Force and the chairperson of the Karelian Association, and photographer Antti Bengs: "Viena – kiusattu unelmien maa" (Viena, tormented land of dreams). (1991). They toured the same villages for a week. Journalist Veikko Erkkilä followed the local life in Jyskyjärvi for a year, and told his account in his book "Vienan kuu" (2003) (Viena's moon).

Markku Nieminen from Kuhmo has written a cultural guide, ”Vienan runokylät” (Poetic villages of Viena), illustrating the central sights of the villages and telling about collecting of folklore. It has been used as a source in many of these pages.

Ontrei Malinen's Kantele Road has a website at www.ontrei.fi. The site has information on the services along the route for independent travellers.

We from Via Karelia travelled the Ontrei Malinen's Kantele Tour Route by car. We have two important tips for independent travellers: To have a proper contact to local life, it is important to stay at people's homes. There aren't many sights accessible by a car. By foot, you can see impressive sights in Paanajärvi and Jyskyjärvi. Either of them has a hotel, though. Other significant sites include the old centre of the poetry area, Uhtua (now Kalevala) and Vuokkiniemi. They are lively villages, where hundreds of people live around the year and enjoy the local services. There are two quite decent hotels in Uhtua.

The other tip is about the condition of the roads. On map, the distances look short and you may think you can tour all the villages in a day from Kostamus. That is not true. At times, the average speed by car is 30 km/h. If something happens, the area is largely uninhabited, the traffic is scarce, and mobile coverage can be poor or nonexistent. You'll get on by taking it easy. There's nothing to be afraid of. People are friendly and generous.

There's a reason for the route travelling from Kajaani to Viena. That was the main route Elias Lönnrot travelled, when collecting folklore. He, of course, made many trips, some of which took years. When he created Kalevala, Lönnrot was the district doctor of Kajaani. Therefore, the main parts of Kalevala were written in Kajaani, but the majority of the poems in Kalevala are from small villages in Viena Karelia.

Ontrei Malinen, after whom the route is named, was one of the greatest masters of folklore. He also played the kantele. In the 1870's, musicologist A.A.Borenius bought a kantele made by Ontrei Malinen to Finnish National Museum. Lönnrot writes in his travel accounts, how he listened to Malinen playing kantele.

The instrument was missing for decades, but it was found again from the museum's storage some years ago. The Juminkeko foundation is on a symbolic journey of returning Ontrei's kantele to Viena. They are founding workshops for building kanteles, organising kantele lessons and developing a tour route bearing the instrument's name.