Restored Structures of the Salpa Line

Suomen Salpa (Finland's bolt), or the Salpa Line, was a defensive line near the eastern border of Finland from Virolahti to Savukoski, built after the Winter War in 1940-1941 and 1944. It proved its worth, when the areas of land needed to be ceded to the Soviet Union after the Winter War. Finland's eastern border had become rather vulnerable, because the existing fortifications were on the ceded land.

The Salpa Line is relatively far away from the current eastern frontier. The Line is the furthest from the frontier, over 100km, in North Karelia.

The Salpa Line was over 1,200 kilometres long and encompassed hundreds of fortifications.

It is still the largest construction site in Finland. In the spring of 1941, as many of 35,000 men were working on it, accompanied by 2,000 women catering the crew. The Salpa Line had 728 base fortifications made of concrete or mined in stone, and some 3,000 wooden field entrenchments. 350km of trenches for battle and connecting the sites were dug. There were 200km of anti-tank obstacles, with some 350,000 stones weighing 3 tonnes in average.

The Salpa Line was the last chain of fortifications based on fixed battle stations, used in military strategy. It was the end of hundreds of years of tradition in fortification.

The Salpa Line sites near Via Karelia 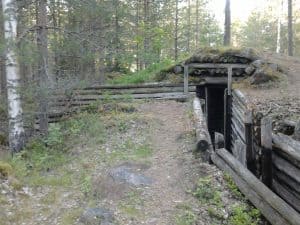 The Salpa Line sites near Via Karelia

In South, a 50km of trail, Salpapolku, follows the Line.

Salpa bunker in Ylämaa, Hostikka
By the Ylämaa – Muurola road, near the Ihaksela crossing at Tuomistonmäki, there's a large fortification site. The area has large shelters mined in stone, infantry bunkers, battle dugouts, trenches, obstacles etc. Road 7 has signs to the site at the Ylijärvi road junctions near the village of Ylämaa. A parking area is available. The site is open every day in summer.

The Salpa Line sites of the Änäkäinen - Puuruu battle line in Lieksa
The Änäkäinen bunkers saw battle in December 1939. The Salpa Line bunkers were partly built on the bunkers dating back to the Winter War. Änäkäinen has a rare type of Salpa Line structure, a cave. The doorway to the cave is now blocked.

Lieksa, Viisikko
When the Winter War broke, the Viisikko Line was the best equipped defensive bunker in Lieksa. These bunkers saw battle in 6–25 December 1939. During the interim peace, the site was made stronger by building more dugouts and by making tank obstacles of four rows of stones.

Kuhmo, Jyrkänkoski
The Jyrkänkoski area was a battle site in the Winter War. The defence line was made stronger during the interim peace. The Salpa Line bunkers can be found near the Jyrkänkoski memorial.

Saunajärvi in Kuhmo, Kannas
The battle grounds of the Winter War in Saunajärvi were used for building the Salpa Line structures.

Suomussalmi, Purasjoki
The Purasjoki bunkers on the Raate Road in the Winter War were made stronger, when the Salpa Line was built.